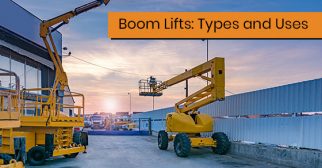 Boom lifts, scissor lifts, and forklifts are some of the most common types of lifting machinery featuring an aerial platform supported by an extension mounted on a chassis or vehicle. These aerial lifts help with lifting, placing, or moving materials, tools, or workers to reach high work areas.

A standard boom lift comprises a platform or bucket connected to a long, jointed crane that is operated by a hydraulic lift system and fixed to a grounded base. A boom lift can also be mounted on a truck or van. Compared to other aerial lifts, the boom lift is best suited to access or deliver materials to hard-to-reach areas that may also be considered dangerous.

Boom lifts are used by different trained and licensed professionals to perform a variety of activities, including firefighting, construction, window cleaning, electrical and cable repair, mining, foresting, and painting.

There are many types of boom lifts to suit the various applications, so it’s important to know the different features and functions of each option in order to choose the right machinery for your job.

The most common options include:

Also referred to as knuckle lifts, articulating boom lifts feature a distinctive bendable, jointed arm whose base is mounted to a turntable that can turn 360 degrees. The arm has multiple joints that give it flexibility to reach up and over obstacles.

The articulating boom can extend to heights of over 100 feet, which makes them ideal for accessing confined spaces and lifting personnel to hard-to-reach areas. They are also used for electrical, cable, and piping repairs, as well as exterior cleaning and maintenance work.

There are different types of articulating boom lifts, such as spider lifts and atrium lifts. They are very narrow and lightweight compared to other aerial lifts, and are mounted on four “legs” to maximize elevation in small indoor areas.

You should consider an articulating boom lift when:

As the name suggests, telescoping boom lifts feature an expandable arm that is attached to a turntable with the ability to rotate 360 degrees. Also referred to as “stick” booms, telescopic beams have a straight appearance. They provide the greatest horizontal reach among all types of aerial platforms.

The telescoping boom is primarily used in jobs that require workers to reach much higher than with other aerial booms and in different applications including industrial, construction, bridge work, and so on. The bucket in a telescoping boom lift is designed to carry only one worker at a time. So it is typically used for specialized work such as electrical repairs, as opposed to generalized work like window cleaning.

You should consider using a telescopic boom lift for:

Also known as cherry pickers, these trucks come equipped with a bucket attached on one end of a long boom where a worker can stand when performing work at a height. Bucket trucks are typically used by utility workers to reach cables and wires that are high above the ground or to lift city workers to trim trees.

These versatile booms can travel on most roads at normal traffic speed, and have a wider operating radius.

These boom lifts are best known for their mobility, as they can be easily transported from one job site to another by simply packing and towing the boom lift. They are also easy to set up on a new work site, provided you determine an appropriate position for the boom lift.

Towable boom lifts can be used for different residential, commercial, and industrial applications, from roof inspection and repair to window cleaning and painting, owing to their mobility and versatility.

Boom lifts provide access to heights of up to 56 m (185 feet). They’re robust and versatile equipment that allow operators to safely and easily perform jobs at incredible heights. But what is the best type of boom lift for you?

Your choice depends partly on personal preference and budget, but there are other more important considerations to ensure that your investment does not go to waste, including:

Find an experienced partner to help you choose the best boom lift for your specific job and work site. For more information about boom lifts, call Dwight Crane at 416-639-2638 or contact us here.